Watch Video
Offered in the unique melange of green and blue tones, the great Grandidierite is one of the rarest and falls as the third most expensive gemstones in the world, according to the report presented by the Forbes in November 2015. The colour of this gem can range from deep green to blue, depending on the percentage of iron present into it. This elite stone is 100% natural gemstone and is not treated in any way. The Grandidierite showcases a very unique play of three-coloured hues when viewed from different angles and hence is mostly sought after due to the unique and complex qualities. 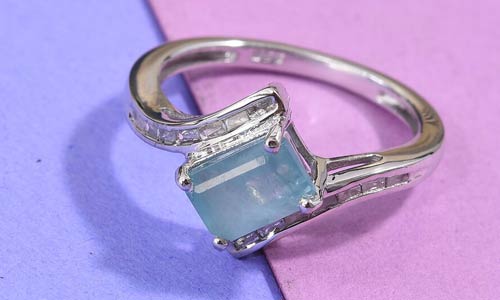 Origin and Supply of Stone

This exclusive gemstone came in the limelight in year 1902, in southern Madagascar. The very first sample of the great Grandidierite was procured by a French mineralogist Alfred Lacroix. According to the Cambridge History of Africa, Lacroix gave the name to this bluish green to greenish blue gemstone after a French explorer and naturalist Alfred Grandidier, who discovered the beauty of Madagascar before anyone else and expressed it in detail. According to an article published by the GIA, this great gemstone in reference to Madagascar was later ascertained in New Zealand, Norway, Suriname, Algeria, Italy, Malawi, India, the United States, Canada, Antarctica and the great Czech Republic. ...This transparent and translucent stone, despite being located at so many locations is available in size larger than a millimetre only in Madagascar and Sri Lanka. Even after mentioned available sources, the Grandidierite is still rare and if mined, swiftly gets depleted.

How is Stone Mined?

The beautiful Grandidierite is mined by mere hands due to the remote locations it is found in and hence is manually extracted and sorted on-sight, by the expert craftsman. By using the spades and pickaxes, the weathered pegmatite which is the meddling igneous rock composed of intertwining crystals is deposited nearby is exploited around the few acres to extract the beautiful Grandidierite. The skilled workers further gingerly tweak the minerals to avoid the harm to the stone and the further damage to their value.

Offering the impeccable sheen and lustre, the great Grandidierite is also best exemplified due to its ultra-radiant colour and the melange of their looks and values. The gorgeous green and the streaks of blue in this stone makes it look enchanting along with the rare and high-end values of the same. ...

2. Cut: It is usually tough to cut a Grandidierite since it shows cleavage in two directions with unequal fractures and extended crystals, making it a challenge to cut and carve. Due to this, the most Grandidierite are small and oval in shape.

3. Clarity: The small and gorgeous Grandidierite are transparent and translucent and hence offers opaque look with the beauty of their crafting. It’s high clarity and sheen makes it stand out and an exceptional gemstone in the market.

What to remember while buying a Grandidierite?

Yes, the great Grandidierite is considered a bit high-end gemstone in the market, since it is the rarest and falls under the category of top ten rare and expensive stones available in the world in the world due to the limited supply and extraction.

2. What is Grandidierite used for?

3. What is the colour of Grandidierite?

This exclusive stone is typically available in beautiful bluish green colour which is derived from the iron content into it and hence highly depends on the proposition of the same.

4. What are the benefits of wearing a Grandidierite?

Other than the looks and opulence of the exclusive factor, the gorgeous Grandidierite is often believed to be a source that can boost your communication skills. It is further said to be connected with the faith, trust, patience and respect.

From the very beginning, the traces of Grandidierite are found in very exclusive locations and that’s what makes this stone unique and not easy to be found. It was traced very first in the Madagascar and further was in other locations, including New Zealand, Norway, Suriname, Algeria, Italy, Malawi, India, the United States, Canada, Antarctica and at last Czech Republic

6. What is Grandidierite made up of?

Grandidierite is a form of magnesium aluminium borosilicate with the formula (Mg,Fe)Al3(BO3)(SiO4)O2 (Lacroix, 1902, 1922a,b) offered in the hardness of 7.5 on the Mohs scale, similar to a Garnet.

7. How to identify a real Grandidierite?

This beauty is a trichroic gem, offering a great melange of colours depending on the viewing angle

One should always buy a Grandidierite from an authorized source.

Earlier it was believed that the Grandidierite can not be translucent but now most of the gems are available in translucent to opaque tones, so the value of the stone can not be determined through its colour.

Grandidierite is faceted, usually with cuts that offer exact carat weight, such as oval shape.