Watch Video
The word Tourmaline has originated from the word ‘turmali’ of the Sinhalese language meaning ‘mixed’. It truly defines what tourmaline is. The gemstone family displays a large spectrum of colours, imitating the appearance of the other gems that occur on earth. The vibrant gemstone family consists of a group of boron silicate minerals. Tourmaline varieties which are rich in iron and titanium attain green and blue hues. ...

The ones rich in manganese occur in red, pink, and yellow colours. Due to the vast number of colours in which it is available, every variety of the gemstone is assigned a different name. The pink and red tourmaline are addressed by ‘Rubellite’. The violet, blue and greenish-blue ones are called ‘Indicolite’, while the tourmalines rich in vanadium are called ‘Chrome’. The rarest of all, with the cuprous content, is called Paraiba, named after the city, where it was discovered first. The most fascinating amongst the gemstones is the watermelon tourmaline which has a pink centre juxtaposed with green on both sides and vice-a-versa.

Some combinations result in multi-coloured varieties of the gemstone. But bicolour and tricolour tourmalines are most common. The dark-hued tourmalines are heat-treated to lighten their hue, which gives them an appealing shade. The opaque brown and black tourmalines are generally not used in jewellery making. Some of the varieties display cat’s eye effect when cut in cabochons. The members of the family have a similar structure but different chemical and physical properties. Silicon, aluminium, and boron are present in all. It is the mixture of other elements (sodium, lithium, calcium, magnesium, manganese, iron, chromium, vanadium and fluorine more) that defines the properties of a particular tourmaline gem.

Origin and Supply of Tourmaline

The journey of tourmaline as a gemstone started 500 years ago when a Spanish conquistador found a sparkling green crystal. He mistook it for emerald. For a long time, the mineral was seen as green and pink rubies, until science intervened. In 1892 George E. Kunz, a gemologist in California studied the green tourmalines found in Mount Mica Mine, Maine. He emphasized on the great quality of the gemstone in his findings. Soon, he went to Tiffany which primarily dealt in precious gemstone jewellery. He not only convinced Charles Tiffany to invest in the gemstone but also became the chief Gemologist for the luxury jewellery retailer for a lifetime....

Initially, the gem was mined in the Minas Gerais state of Brazil. In the 1800s, it served as the largest source of tourmalines to the entire world. Afterwards, in 1822 mines of tourmaline were discovered in the United States, at Maine. In the 1900s, several new mines were started in San Diego county of California. Soon, Americans became the largest producers of this gemstone, exporting large qualities of tourmaline to the neighbouring countries. The last empress of China, Dowager Tz'u Hsi was so fond of the pink tourmaline that she bought a copious amount of the gem from the US. Shortly after the Chinese government collapsed the US tourmaline trade also went down. However, that wasn’t the end of the beautiful gemstone’s story. In the 1950s, new reserves of the gem were found all around the world. Today Africa is one of the leading sources with Nigeria and Tanzania being the forerunners. The other countries which produce tourmaline gemstones are Afghanistan, Mozambique, Namibia, Pakistan, the United States, Madagascar, Russia, Burma (Myanmar) and Sri Lanka (Ceylon).

How is the Gemstone Mined?

The gemstone is hidden inside the pegmatite rocks. The miners have to dig deeper into the earth’s surface as low as 5 miles to reach the point where the gems are laid in the sediments of rocks. After the construction of tunnels, no specialized tools are used to extract the minerals from the pegmatite veins. Once the miners reach the gemstone pockets, they identify the crystal and pick it by hand. Only 5% of the total gemstone extracted are of the quality to be used in the jewellery making. 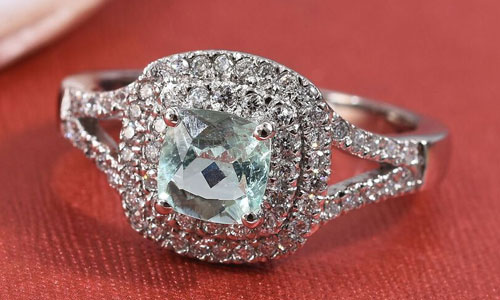 Hardness - The gemstone has a hardness of between 7 to 7.5 Mohs. This makes it less prone to damages; thus, it is ideal for adorning jewellery ...

Pleochroism - The gem displays two or more colours depending on the angle of viewing. It appears dark down the C-axis and light-hued when held perpendicular to the long axis of the crystal. How vivid a gem will look depends largely on the cutter. If the gemstone is oriented right, the best face-up colour can be produced.

Colour Zoning - Tourmaline is one of the few gemstones that displays a well-defined colour zoning. The atmospheric conditions result in the different hues within the same crystal. Generally, uniformity in hue is one of the primary factors to assess the quality of a gemstone but the zoned tourmalines have garnered appreciation worldwide becoming an exception. The bicolour gemstone variety is of great prominence amongst the specimen collections and designers. The vibrant zoned gems sometimes do not show the flawless clarity of the single hued tourmaline still they are priced for the unique combinations of colours.

What to remember When Buying Tourmaline

1. Will Tourmaline get damaged by water?

No, it does not affect the crystalline surface of the gemstone.

2. Which hues should I prefer when buying a tourmaline?

The vivid blue, red and green colour tourmalines look spectacular. But if you can manage to purchase the electric green-to-blue ones you will definitely get a great resale price.

3. Is a watermelon tourmaline worth investing in?

A watermelon tourmaline which is 100% pure, i.e. not given any kind of treatments with no visible inclusions in a considerable size can fetch a good price. It all depends on the quality of the bicolour gemstone.

4. How can you tell the difference between a real and a fake tourmaline?

The gemstone displays pleochroism. To know whether the gemstone is a real tourmaline gem you can rotate it in various angles. If the colour is not changing, it is not a Tourmaline. There will be at least a slight variation in the hue even if it is a single hued gem. If you are buying a tourmaline for purposes other than decorating jewellery, strike it slightly with a steel blade. These blades have a hardness of 5.5 mohs, they can’t scratch tourmalines which have a hardness of 7 to 7.5 mohs.

5. Is tourmaline an expensive gemstone?

The price of the gemstone will generally depend on the size, colour and clarity. The most valued are the Paraibas which are sold at prices as high as $10,000 per carat. On the other hand, the yellow tourmalines are sold at a very cheap price at times.