Watch Video
Prized and treasured for its marvellous and engaging hues, here is a gem that has been popular since ages! The crimson delight finds its centre spot on countless designs of jewellery. Known to have the highest price per carat, it is also considered to be one of the most important gems of the market. In fact, this gemstone is counted among the cardinal stones, which also have diamonds, emeralds, amethysts, and sapphires. Here, you’ll find everything there is to know about the dazzling and hypnotizing gemstone. Ruby has been regarded as an incredibly powerful stone since times immemorial. Over the centuries, there has been a lot of speculation about the beautifully-hued gem. It was believed by ancient Hindus that whoever presented this gorgeous gemstone to Lord Krishna would be made an emperor in the next birth. History of the gem has also told us that some people wore it in the left hand, believing it would bring them power and fortune. Some people say that Ruby was considered to be the most powerful stone among the 12 gems that God created! 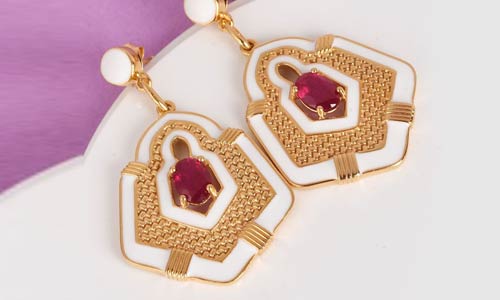 Origin and Supply of Ruby

Name of this gem is originated from the Latin word “rubens,” which is for red. Known popularly with its mesmerizing and captivating crimson colour, this gem has been coveted by countless since it was discovered. It is also considered to be the stone of tales. Because of its deep colour, it has been associated with a lot of legends and mysteries, formed over the years. In fact, ruby birthstone is considered to be among the most important birthstones. They are also known for their different places of origin. Their colour and grade, too, change with their origin. Two most popular areas of origin are...

Mined and sourced from Myanmar, these stones hold an intense, rich, and highly prized deep red colour with hints of blue. These gems are considered to be rare and expensive. In fact, these are the among the finest quality of the stones ever found. The gorgeously hued and extraordinarily clear stones are rare and comparatively higher-priced, too. Their most expensive range is called Pigeon Blood Ruby, which has a hypnotizing crimson red colour.

African Ruby:- The main features of African rubies are their colour and transparency. These stones have a rich and deep red colour, which ruby is mainly known for. However, they come with opaque clarity and contain a lot of inclusions. They’re mostly used for cabochon cuts. The colour may vary from a dark red to darker pinks.

Thai Ruby:- When initially discovered, Thai Ruby was recognised with its deep and intense red colour, which is quite similar to the shade displayed by garnet. Over the years, heat treatment made the colours look richer and lighter, a process that exponentially increased the value of Thai Rubies! Now, these gems are reigning their market with the excellent clarity-and-colour combination.

How is Ruby mined?

Pit Mining:- This process is used in river deltas or areas that were deltas at one point. Here, the core carrying gem is placed, and strong irrigation process washes away the mother rock, sand, dirt, gravel, and other additions found around the stone, leaving only the strong and sturdy crystal. This process is used for the cores that are 3 to 24 metres deep.

Open-Trend Mining:- This is employed when mining for the gems is carried on the mountains. Strong pressure of water is applied on the slopes where the rocks are found. This pressure washes away all the sand, gravel, and mother rock, leaving only the glistening crystal behind. However, this process results in comparatively smaller stones as found in pit mining.

Cave System:- Small caves are dug in the ground to locate gravel containing the gem. Again, these rocks are cleaned with strong pressure of water to wash out the mother rock. It usually results in a higher yield; however, the caves collect water that needs to be pumped out. They are also usually abandoned during the monsoon season for the risks of flooding. 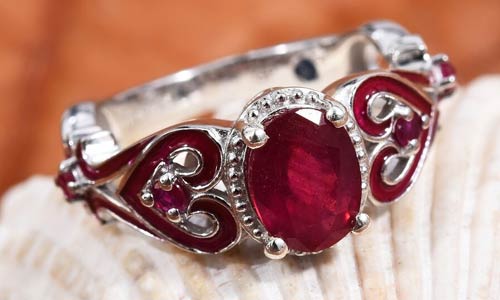 The beautiful gemstone is primarily identified on the basis of its exceptional colour paired with brilliant clarity. It is a variety of mineral corundum. Its deep and inviting red hues are due to the presence of chromium. Considered to be among the costliest crystals, these gems’ values shoot up with their intensity of colour and carat weight. In fact, ruby is among the stones whose price is directly related with the carat weight. Higher carats always mean higher-priced gems. Here are the 4 most important determining features that will help you identify the quality of your stone ...

1. Colour: The most important feature of a ruby is its colour. Known for its gorgeous and darling reds, it has been loved worldwide for its intensity. The highest-grade stones will have a rich, dark, and indulgent red with hints of blue in it – this shade is called “Pigeon’s Blood Ruby.” Other grades offer you different shades of red. The lightest shade, which margins on pink, is usually called “pink sapphire” instead of a ruby. If you wish to identify your precious stone from an imitation, know that the real one will glow.

2. Cut: The sparkling gem can be found in several cuts and facets. It is a gemstone known for its brilliant vitreous nature and can be chiselled in various cuts just to flaunt that. The cuts popular in smaller stones are round, oval, asscher, trillion, marquise, and emerald-cut, among others. However, the bigger-sized varieties will usually be found in oval or cushion cuts, as these cuts preserve rough weight.

3. Clarity: Ruby, along with its colour, is also known for its exceptionally beautiful clarity. The stone has a crystalline make, promising visibility through it. That said, small inclusions and fractures in the gem are considered absolutely natural. But, if these inclusions are reducing the transparency of the gem, they will reduce its value. That said, it is increasingly rarer to find large stones with no inclusions.

3. Carat: Ruby is counted among the few stones whose value increases with its carat weight. This is because finding a stone above the weight of a carat is considered to be rare. This is primarily the reason why the prices of ruby go up as their carat weight increase. Rarer gems command higher prices, always.

Ruby Gemstone Treatment:- Most of these gemstones undergo some or the other kind of treatment. Among the most popular is the heat treatment, which is used to enhance its colour. The fractured rubies are also filled with lead glass. After faceting, your stone might have also been oiled or dyed at some point. However, it is very important for you to ask your jeweller for proof and information of all the treatments used. You must also remember that almost all the gemstones have been through some or the other enhancement or treatment. 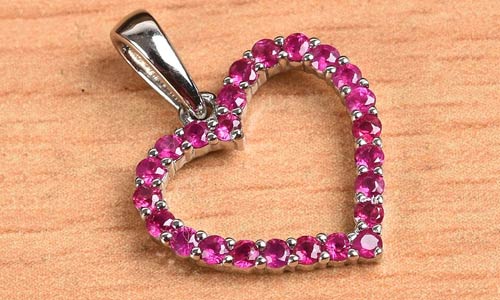 What to Remember While Buying Ruby?

1. How Do You Know A Ruby Is Genuine?

The best way of finding out if your stone is genuine is by studying its colour. It is a known feature that a real ruby has an almost glowing red shade. The imitations have bright and synthetic red, much unlike luxurious and deeper tones of ruby.

2. What is The Different Between Pink Sapphire and Ruby?

The difference has everything to do with how much red is present in this stone. Both the gems are variants of same family and are varieties of aluminium oxide. However, the amount of chromium sets them apart. In fact, beryl with lighter tones of pink are called pink sapphires.

3. Which Ruby is The Best Quality?

The grade of rubies usually depends on the 4C’s, which are cut, carat, colour, and clarity. However, origin plays a very important role. The highest-grade stones are called Burmese Rubies and they’re mined in Myanmar. They boast of deep red colour with a tinge blue.

4. What Are the Benefits of Wearing Ruby?

If astrological medicine is to be believed, ruby has lots of physical benefits. Wearing the stone may improve eyesight as well as blood circulation. It is also believed that it gives the wearer strength and confidence for a long time.

As opposed to the lab-created rubies, natural stones are minimally treated. They are found with stunning intense red colour with impressive clarity. These features, however, do increase the per-carat price of the stone.

6. What Colour Ruby Is Most Valuable?

Variants of the stone boasting dark and deep red colour, with tinges of blue in them, are supposed to the best grades. Even the stones with purple-red hues are higher-priced. However, as the colour washes down, the grade of the stone also falls down along with the prices.

7. Is Ruby A Birthstone?

Yes, ruby birthstone is considered important for all the people who are born during the month of July. It is also considered to be the best present for 15th or 40th anniversaries.

8. Can You Scratch A Real Ruby?

Ruby ranks 9 on the Mohs Scale of Hardness, which makes it a pretty strong stone. That said, it isn’t as hard as diamonds. It is not easy to scratch the stone. However, if you wish to identify your stone from a fake, you may scratch the base using a coin. If you’re easily able t scratch it, the gem in hand is fake.

9. What Does Ruby Symbolize?

The intense red colour is associated with strength and passion. The stone, for a long time, was known to indicate love and togetherness. It is still considered to be among the stones best for symbolizing power as well as powerful feelings.

Ruby is a variety of aluminium oxide. It gets its red colour from the presence of chromium. Smaller-sized gems are abundantly found in the market, and they aren’t as expensive either. However, it is seemingly difficult to source these stones above the weight of a carat. This makes them rare, and hence, higher priced, too.