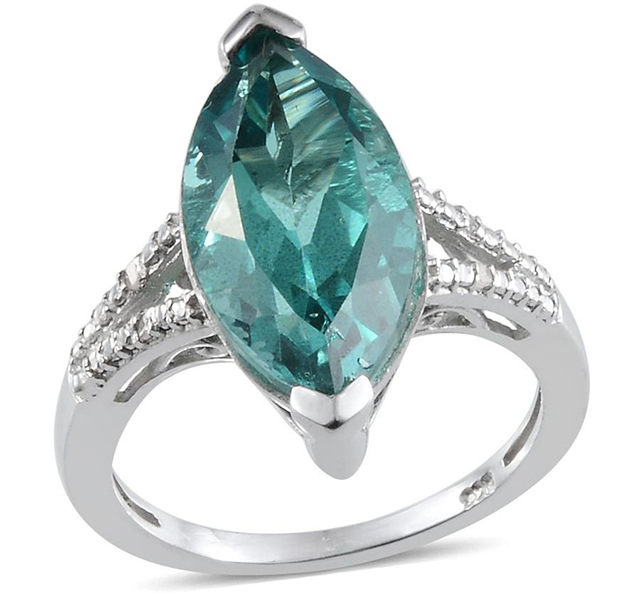 The Paraiba tourmaline is popular for the unique range of blue-green colours and property to sparkle in a fairly low amount of light. The rare gemstone was first discovered in the Paraiba state of Brazil in 1989 by Heitor Dimas Barbosa. Interestingly, it was merely his intuition that inspired him on a journey to the depths of the earth. The man dug the hills in the region for five years with no success. His hard work came to fruition during the autumn of 1989. A neon-hued gemstone was found. The scintillating tourmaline had large qualities of copper, giving it a radiant blue colour.

Along with copper, manganese is also found in the gemstone. The mix of both elements results in a variety of hues such as emerald green, dark blue, sapphire blue, indigo, bluish-violet and purple. A high concentration of copper results in blue and green undertones, while manganese gives violet and red hues. To create a flawless blue Paraiba gem, the manganese section is removed using burning technique.

Nature has strange ways of bringing exquisite beauties back into existence. The same happens with tourmaline when a gemstone with a chemical composition similar to Paraiba was found in Africa in 2001. Deposits of a copper-bearing tourmaline were discovered first in Nigeria (2001) and consecutively in Mozambique during the year 2005. It started a controversy in the gemology sector. Some gem connoisseurs stated that only the blue-green tourmaline from Paraiba should be called ‘Paraiba gemstone’.

Origin and Supply of Paraiba Tourmaline

Finding the same gemstones on two different continents of the earth is not a coincidence. If you look at the edges of South America and Africa in a map, you will notice that the outlines of the South American eastwards make it easy to fit into the western coast of Africa. Nigeria can be accommodated in the north-east part of Brazil. It is believed that the composition of the gemstone in Nigeria and Paraiba is similar because they went under a similar climatic condition during the formation that occurred before the continental drift.

1. What is cuprian elbaite?

It is another name for Paraiba gemstones. Apatite is the mineral group consisting of phosphates. Apatites have vivid colours due to the rare earth elements present in them.

2. How much is the Paraiba tourmaline worth?

For every 10,000 diamonds, only a Paraiba tourmaline is found, one that weights higher than 3 carats has been mined over the past few years. This is mainly because all the three mines in Nigeria, Paraiba and Mozambique have been exploited. There is no new source of the gemstone found as yet.

3. What are the common hues in which Paraiba gemstone is available?

The gem arises in blue, green and violet hues. The copper-rich tourmaline which has pink, red, and purple hue are said to be close to Paraiba Tourmalines. The Paraibas with the electric blue have the brightest shade.

4. Which anniversary gemstone is Paraiba?

It is gifted on 8th anniversary.

Paraiba Tourmaline exceptionally sparkles even in poor light, and it ranges from transparent to opaque. To put its rarity into aspect, there is only one Paraiba mined for every 10,000 diamonds.