Watch Video
Spellbinding and showstopping, these little beads of crimson jewels are what you have shown lots of love to. Garnet is a stone that has made its place in the hearts and sights of countless. The hypnotising clarity and sinful colour hold a lot of mysticism. Evoking a deep sense of luxury, the excellence of garnets is loved and cherished by everyone. Absolutely bewitching in all senses and ways, they’re popular and loved for their fabulous crimson red hues. However, they can be seen in other colours, too. There’s a lot of mystery in the air when it comes to these spectacular treats of nature. We have collected a reservoir of knowledge and information, containing all that you need to know about this spell-casting gemstone. Come and read everything we have to tell about these absolute luxuries! 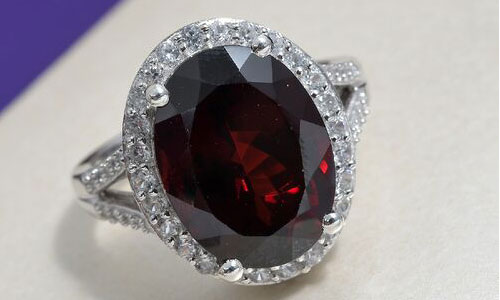 Known to be ages old, garnet has been loved by humanity for its excellent hues. It has not only been used for jewellery, but also notes some uses as an abrasive, too. Gemologists have regarded it as not a single mineral, but a group of some. The group of different silicate minerals have the same crystalline structure, but they have different chemical compositions. Contrary to popular belief, the stone is available in many more colours than just red. Other noted hues of this stunning jewel are orange, brown, blue, purple, pink, and even colourless! That said, the most popular and reigning colour remains the dark and stunning shade of red. Name of the word “garnet” is believed to have originated from 14th Century’s Middle English word “gernet,” which meant “dark red.” The Middle English word has been taken from the Latin word “granatus,” which can be traced back to “granus” for seeds. Garnet is a beautiful gemstone that can be found all across the globe. As previously mentioned, it is a group of silicate minerals. Every different composition can be traced to a different source. It’s a stone that has been abundantly located across the globe. Some of its major locations are Mozambique, Madagascar, USA, Kenya, Turkey, and even Tanzania. 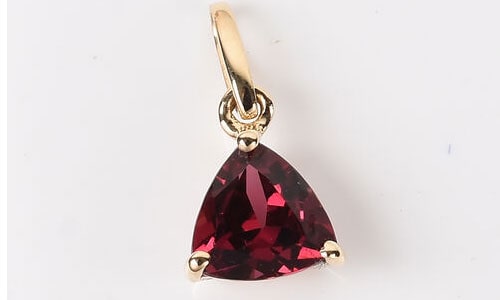 Like most of the other gemstones, garnet too, has some distinguishable features that set it apart from all the other gems. In fact, there is a whole list of noticeable characteristics that you need to look for, when you’re shopping for this beautiful gemstone. Below, we have mentioned the list of major 4Cs of garnets that will help you grade and value the stone in hand. They will also help you in knowing which of the specimens is better graded and in what terms: ...

1. Colour: Among all the significant characteristics of the stone, the most important and popular factor is its colour. Garnet’s quality can be instantly accessed if you study its colour. You’ll find that these gems are not only available in the single dark-red colour that you can think of, but also in a stunningly vast variety of other hues, such as pink, purple, orange, brown, and a few more. That said, among the higher-priced varieties are the garnets available in dark-red colour, along with a few specimens in brilliant green. Some rare pieces of this stone variety also display dichroism, which means that they show different colours when they’re displayed under different lights.

2. Cut: Another note-worthy feature of these beautiful gemstones is their cut. The cut and faceting need to be so that they display the intensity of colour in the best of ways. Most of the stones can be chiselled into any kind of cut preferable, from round, oval, cushion, to marquise, heart, and more. However, the green-hued tsavorite garnet and demantoids are usually chiselled into a cut that preserves the carat weight. These stones are rare to come across and have a higher value for the same reason, too.

3. Clarity: One of the most appreciable features of this spectacular gemstone is its clarity. This factor, too, also changes as the variety of garnet changes. In some varieties of the stone, you’ll note absolute absence of any inclusions or clouding, which makes them higher-priced and valued. But, on the other hand, there are some stones with small specks noted in them. The coloured varieties of pink, red, and purple are usually clean to the naked eye. However, if we’re speaking of orange and brown-coloured gems, they might have inclusions. Some garnets also display asterism, which is a term used for star-like effect on the stone.

4. Carat: Due to its abundance in findings, you’ll note that garnet can be sourced in several different carat weights and sizes. In case of the rarer varieties, like demantoids or tsavorite, the increase in carat weight also increases their prices. It’s mostly because of the fact that the mentioned variety of gems is only available in smaller sizes. Other varieties of garnet can be seen in bigger cuts with bigger carat weight. Conclusively, the importance of carat weight in valuing your gemstones depends entirely on what kind of garnet we’re talking about.

Garnet Gemstone Treatment - You’ll note that most of the gemstones in the circulating market are treated in some way or the other. However, that is not the case with garnets. Among the accepted treatments for gemmologist are irradiation treatment and heat treatment, both of which have proven to be inefficient when it comes to these gems. This is why garnet stones are sold just the way they’re found, and they might be one of the rarer stones to have that. 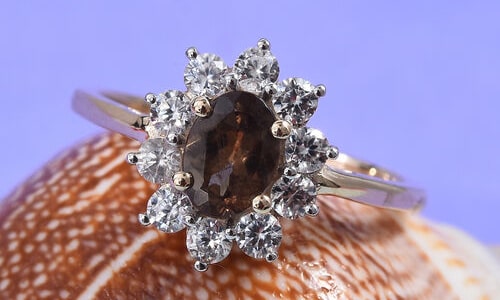 We house a multitude of collection, here at TJC. Our marvellously spanning collection of stones displays rich versatility. You will note lots of different shades and colours of the gem, faceted to glimmering perfection. Here are some of the more popular varieties that we have to offer:

Known for its delicious apple-red colour, this stone has been revered by countless. Acknowledged for its spectacular aestheticism, it finds its centre-spot in countless jewellery designs that are curated to reign the trends. The gorgeous stone has a deep and lovable colour that instantly adds a royal touch. ...

The variety of stone with a slight pink-ish tinge in the red base, this stone looks absolutely breath-taking in clusters. The rich and magnetic pink-red shade of it makes it an instant showstopper. Used for extraordinary designs, this gem is a true keepsake in all ways that count.

You won’t believe this range of the said gem! Famous for its brilliant and stunningly rich green colour, this gem closely resembles to the hues of emeralds. With enviable clarity and a perfect glimmer, this is the best thing you can do to your jewellery. 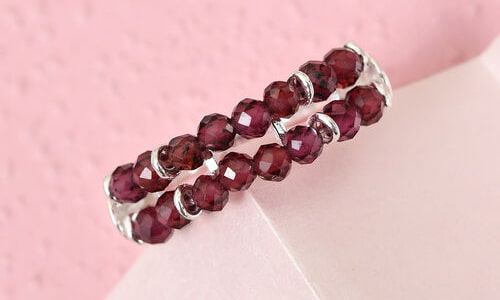 What to Remember While Buying Garnets?

1. What Is the Rarest Colour of Garnet?

There are lots of colours and shades available of this gorgeous gemstone. The most popular colour is red, while one of the more regal shades is orange. However, the rarest of all the colours is the exotic and stunning green, displayed in tsavorite garnet.

2. How Can You Tell If Garnet Is Real?

Garnets come with a lot of cheap imitations. In fact, the ones made from glass are quite similar to the real ones. The best way of identifying them from real ones is by holding them close to the eye against light source. You’ll see kaleidoscopic hues playing inside of it.

Garnet ranks 6.5-7 on the Mohs Scale of Hardness. This means that it’s pretty durable. However, it is still susceptible to scratches and external abrasions from a strong impact or when rubbed against surfaces stronger than this.

4. What Is the Difference Between A Garnet and A Ruby?

The mentioned two stones have often been confused with each other. If you put them together, you may find it rather easy to differentiate. The rich red of ruby is a lot lighter and more vivid, while garnet has a richer and darker tones of the colour.

5. Where is Garnet Found?

Garnet is quite an abundant stone. It has been sourced from lots of locations spanning across the globe. From its more popular sources are Brazil, Madagascar, India, Mozambique, Kenya, USA, and many more.

6. Is Garnet A Lucky Stone?

Many people believe that garnet is, in fact, quite a lucky stone. It is believed that wearing the stone brings luck in friendship, love, and career. It is considered to be among the stronger gems of the healing world.

7. Is Garnet A Birthstone?

Garnet Birthstone has been assigned for the month of January. It was done back in the year 1912 at the time of accumulation of list of birthstones. It is believed that it would bring luck and happiness to the people born during the month.

It has been mentioned many times above that garnet is a stone that’s available in a whole rich range of colours. Green garnet is a variety that’s rare and extremely prized. It’s called the Tsavorite Garnet and it has deep and exotic colour, very much like that of emerald.

9. What Are the Healing Properties of Garnet?

Over the centuries, garnet has been associated with a lot of power. People believe that there are lots of benefits of wearing the stone, some of which are also for physical ailments. Healers claim that it helps in purifying the blood and strengthening the immunity system.

10. How rare is Tsavorite Garnet?

Tsavorite garnet is considered to be among the rarest varieties of the stone. This is rarely found in sizes more than 2.5 carats, which makes it extremely prized and treasured. In fact, much caution is practiced while cutting it, so they can minimize the loss in roughage.