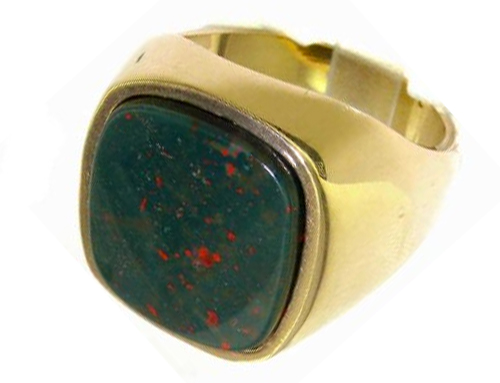 Uniquely fascinating, bloodstone is one of the oldest gems known to man. This mysterious gem is often referred to as the ‘Martyr’s Stone because of the many myths surrounding it.

Origin and Supply of Bloodstone

The mineral bloodstone is also called heliotrope, which in Greek means ‘sun turning.’ This dark green stone with distinctive red flecks comes from the chalcedony family, a form of cryptocrystalline quartz. Legend has it that the bloodstone was formed at the crucifixion of Jesus Christ when his droplets of blood stained the green jasper at his feet. This beautiful mythological stone is also believed to have many healing properties.

Bloodstone measures 6 to 7 on the Mohs scale of hardness, so while it is not supremely delicate, it will be reasonably prone to scratches from daily wear and tear if you’re not careful.

This attractive gem is usually cut into what is called the cabochon shape, and is also used extensively for beads. Furthermore, in earlier times it was a popular stone for a setting in men’s rings.

When used in jewellery, bloodstones tend to be coated with a special polish to enhance the lustrous shine of the stone.

This enigmatic stone is uniquely distinctive and surrounded by interesting legends of old. Bloodstone gems make an alluring addition to jewellery – their depth of character and spectacularly original colour formation make for an outstanding choice amongst discerning buyers.