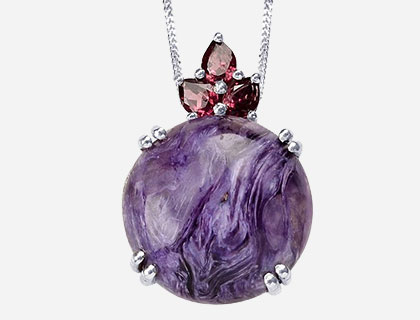 You may have heard Burmese rubies gaining all the fame and popularity for their ravishing crimson colour and animated quality. However, that’s not the only stone this region is famed for. Myanmar (called Burma before) is also a famed provider of an electric blue-hued collection of sapphires, ever since a very long time. The stone is coveted for its brilliant, dark blues and connoisseurs love it!

Bundling the colours of twilight sky, Charoite is the best dream of all the fancy stone collectors! Praised to be one of the most mesmerising and rare stones, it flaunts the most magnificent deep violet and purple hues, with streaks of white. The scintillating stone is called and regarded as “unnaturally beautiful” by several connoisseurs. The rarity of it makes it even more sough-after. Many people do not believe that the gem is naturally-occurring, given its brilliant play of colours and feather-like streaked patterns. However, much against the popular belief, it is indeed found and mined this way.

Borrowing its name from the Latin word “caeruleus,”Ceruleite means “Sky blue” for the colour that it portrays. It is actually an incredibly rare arsenate mineral and is only sometimes found for for a size to be moulded into jewellery. Mostly, the raw rocks found are enough to extract small cabochons. The limited availability of the stone is exactly what makes it one of the most sought-after gems. Discovered in the period around 1900’s, this stone has garnered a lot of positive attention since then. With its appealing blue colour and only a few sites of mined extraction, it has come to be a prized gemstone.

As of now, the biggest source of Ceruleite is in Guanaco district, which is about 100 kilometres east-northeast of Taltal, in Chile. There have been recorded a few other locations of it as well, like Bolivia, England, Franca, Australia, and Namibia. However, the best and the most consistent quality is mined from the Emma Louisa Mine, which is in Chile.

The healing properties of Ceruleite are as pure and promising as its lustre. It has been considered one of the most revered stones of all times for its purity and promise of class and quality. Not only that, many healers believe that it harvests good fortune and facilitates communication. There have been recorded other benefits as well, like several people stand to believe that it provides considerable relief from throat ailments.

The blue colour of the stone is associated with water as well. There are tribes across the world who believe that not only does it contain the force of water, but it also helps dissipate fear of water and drowning. Some people regard it to decrease dehydration as well. Some other benefits of wearing the stone, which healers suggest, are that it provides strength and immunity to the body, it promotes and encourages smooth conversation, stimulates intuition and some latent psychic abilities, and more.

Ceruleite is also considered by astrologers to work for the throat chakra, which means that not only does it keep your throat free of health-related issues, but also gives you the power to voice your opinions in the most rational manner. It is said by the same astrologers that this gemstone encourages and facilitates a proper communication channel.

We’ve already established the fact that owing to its low rank on the Mohs scale of hardness (5 to 6,) you need to keep the gemstone carefully and safely. It is one of the softer stones, which means that it can break easily. If you’re wearing a ring with this stone, you should consider removing it before you do something manually strenuous. It is also important to note that you cannot have it cleaned under mechanical systems as they tend to shatter the stone or at least cause some level of damage to it.

If you do want to clean the stone, you may use water. Just fill a bowl with warm water and put the stone in it. Wash the grime and dust with soft hands; you may also use a soft-bristled toothbrush if required. Rinse it in a steady stream of cold water and wipe with a soft towel or chamois cloth.

If you’re out shopping for Burmese Sapphire in UK, then there are a few facts that you can do well knowing. Some of these more popular facts have been mentioned below: