PAY DAY DEALS UP TO 60% OFF
FREE DELIVERY-DIAMOND JEWELLERY UP TO 55% OFF
EXTENDED RETURNS until 15th January 2021
#MYSTYLE Record upload, and earn with TJC
<< Back to Results

Watch Video
Blue as the sky and smooth like the mirror, turquoise is a gem that is loved and coveted by plenty. Its gorgeous hue in combination with the unique patterns make it so beautiful that no other gem parallels its beauty. With webbing and veins making it seem much prettier, every stone in the range is different than the other. The gem is primarily known for its gorgeous blue colour, which has a shade named after it, called “turquoise blue.” Seemingly affordable, it is a favourite stone of all jewellery enthusiast and a lovable selection of designers. There are a lot of things that the stone is famous for, and we’re going to list them for you here. Come and read about the stunning gem and all there is to know about its famed tales of beauty.

Origin and Supply of Turquoise

The term has been derived from an old French word “turquois,” which translates in to “Turkish.” This was said so because the shiny and perfect-looking gem was imported to Europe from Turkey, where is was famous of. The name was given as old as in the 17th century.

Turquoise is a gorgeous opaque gemstone that is rare to find in high-grade quality. It has been composed of hydrated phosphate of copper and aluminium. It can be categorised as a mineral and is available in a stunning blue-green colour. It is usually seen to be found in arid regions where the land is barren and dry.

When it comes to the supply of this beautiful stone, its gemstone-quality specimens are rarely found. There are only a few regions where you can mine the high-grade and fine-quality jewels. In fact, turquoise’s varieties are sometimes also categorised by their origins! Below are some of the more popular origins of it.

Arizona – Both Mojave Turquoise as well as Sleeping Beauty Turquoise are being mined from the state of Arizona, USA. Sleeping Beauty Turquoise is called so as the mountain from where it is mined resembles quite closely to the shape of a woman lying on her back with her arms closed. The mine started operating about 40 years ago, when it was dug up to locate copper and gold. Other source in Arizona itself is Arizona Kingman Mine, which is popular and famously known for the rare, prized, and extraordinary Mojave turquoise.

Iran – Previously known as Persia, the country is extremely popular for its finest grade of the said gemstones. Persian turquoises have an exceptional brilliance of both colour and texture. These extraordinary features are the reason why they are counted among the most expensive varieties of the stone. Major mines of the jewel are located near the city called Nishapur.

How is Turquoise Mined?

The procurement of turquoise is usually done using heavy machinery. Light explosives are used to break the surface of Earth and promising veins are located that might carry the beautiful gem. Then the rubble is raked and small rocks carrying the stone are collected. Even though using dynamite and other explosives offers a higher yield, it is destructive if you wish to locate bigger sizes. Turquoise has stability that is only a little bit more durable than that of glass, so explosives cause damage to the size.

Commercially, only a single location has been placed in Iran, from where they mine the beautiful gem, and it is located in a small section of Ali-Mersai Mountain Range, which lies just on the outside of the city called Mashhad. More turquoise is mined from popular locations in Arizona as well as Nevada, where the gem is only the by-product of mines that are dig up to locate copper and gold. 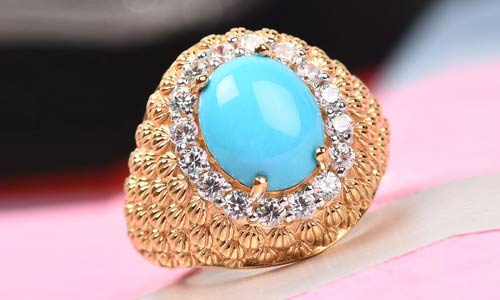 Famous and coveted for its brilliant blue-green colour, the stone is quite popular in the market for beautiful jewellery. Smooth, soft, and pale blue, there are more things and features about the stone that you need to know. In this section, we’re going to list all the factors and qualities of this stunning gem that affect its value. Read to know just how you can determine the value of your own stone.

1. Colour: Among the most noticeable features is the turquoise colour. The gem is known for its blue-green hue that can be seen in almost all specimens. However, that’s not the only colour that is available in. The gem sees many other bright and vibrant shades, most of which are featured in its variety called Mojave Turquoise. Other than that, you may also note webbing and/ or copper veining that make its aesthetics more appealing. That said, the most popular shade you’ll find is blue. Other rarer stones feature a lime green-blue colour slightly green-ish blue, too.

2. Cut: Due to its smooth and polished nature, the stone looks best in cabochon forms. The most popular cuts of this stone are smaller, given its soft nature. You may find lots of different shapes in the cabochon, like round, cushion, heart, circle, and many more. In other variances, you may also find popularity in its beaded forms. Many designers experiment and also deliver oval or oblong beads, which bring a fresh wave of new cuts in the field.

3. Clarity: Another feature of turquoise is its clarity, or lack thereof. It is a gem that is only found in opaque clarity. In some extremely rare cases, you may locate a stone that is semi-translucent. The major factors affecting its clarity are the webbing and veining that are seen on its surface. Available in smoothened cabochon forms, these stones are among the few stones that are make the cut famous, and not the other way.

4. Carat Lastly, the quality of turquoise is also affected by its carat weight. Turquoise is available in a whole range of sizes, from the small versions to rarely seen bigger specimens. However, carat doesn’t have a lot of effect on fluctuation of prices of these stones. You may find the gem in several carats from as little as 1 to even 5 or 6!

Turquoise Gemstone Treatment - Like many other gemstones, turquoise too, undergoes treatments. One of the most popular of these treatments is oiling or waxing. In this, a sheen layer of smoothening oil or wax is applied for a “wetting” effect. This forms a layer on the stone, which enhances its lustre and colour both. Other noted treatment is stabilization, where epoxy or resin is filled on the stone to make it more durable. This is done because naturally, turquoise is a relatively softer stone. 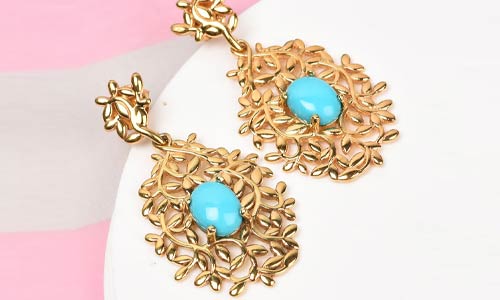 What to Remember While Buying Turquoise?

1. Does Turquoise Have Gold in It?

No, even though some of its varieties may have gold tinge in streaks, it doesn’t mean that the stone has gold. Most of these deposits are copper. The boulders that turquoise come from rocks that are rich in copper and aluminium, hence the streaks of gold.

2. What Is the Most Valuable Colour of Turquoise?

The most precious colour of this gem is considered to be in medium blue. The absence of matrix just makes it even more beautiful. If it comes in a shape that offers great polishing, its value will instantly shoot up.

3. What Is Sleeping Beauty Turquoise?

A precious and beautiful variety of the stone that is mined from Sleeping Beauty mines, located in Arizona, USA. The mines are called so because the shape of the mountain where they’re located resembles the silhouette of a woman lying on her back, with her hands crossed.

4. What Is Turquoise Stone Good For?

Since ancient times, the gem is known to harbour lots of powers and benefits. It is believed to be the stone of protection and is often worn as talisman or amulet. Many believe that it offers good luck and positivity to the wearer.

5. Is Turquoise A Birthstone?

Yes, turquoise has been assigned as birthstone of the month of December. It was added to the list back in the year 1912. Many believe that by wearing it, people born during the month may wear luck, joy, and happiness.

6. What Does the Stone Turquoise Symbolise?

To many, this gem symbolises protection and strength. To many others, its open-sky hues represent freedom and independence. Ancients also wore the gem as a protective stone that keeps them away from evil eye.

7. Where is Turquoise Most Commonly Found?

The gorgeous blue gem is found in several locations spanning across the globe. Most of its reserves are found in arid and barren areas. As of current, the most popular mines of it are placed in Arizona, Iran, Mexico, China, Chile, and Australia.

Turquoise ranks extremely low on the Mohs Scale of Hardness, which is only at 5-6. This means that the gem is extremely susceptible to damage and cracks upon impact. Its low durability makes it very to be chipped off or scratched.

9. How Do I Clean My Turquoise Jewellery?

It is not advisable for you to place your stone in water, and most of it has to do with the fact that it has water elements in it. To clean your stone, you can dampen a cloth or a brush and very gently scrape off the grime. Clean the stone once again using a lightly damp cloth. Do not place in in water for a long time.

10. How Can You Tell Real Turquoise from Fake?

There are some extremely easy tricks for that. If your stone is in the beaded form, check its insides; if it’s white, then your stone is probably a fake. Also, if there are small bubbles in your stone, it is more probably made from glass.