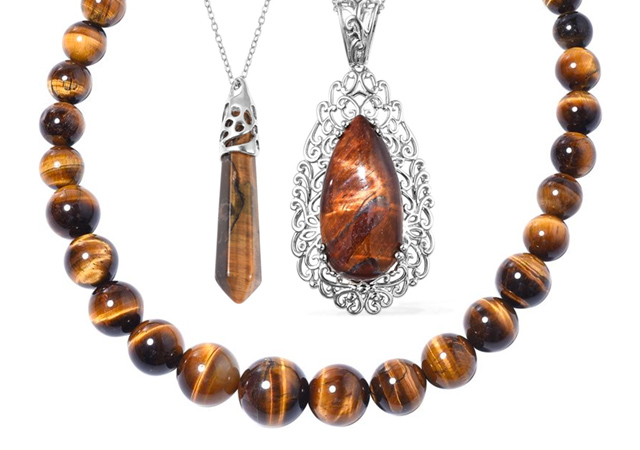 Tiger’s eye is a marvellous gemstone widely cherished for its remarkable chatoyancy effect. The stone displays unique layers of gold and brown colour that dance like shafts of light through a dense forest over the surface of stone. Tiger’s eye is named after the characterises of tiger and associated with the eye of the cat. It has a beautiful yellow colour that offers an extraordinary honey glow. The stone has inclusions of iron and quartz, hence, offers it an appearance resembles to the tiger. This gorgeous chatoyant stone is a mysterious variety of Quartz displaying fascinating patterns under lighting exposure.

Also known as ‘tiger’s eye’, ‘crocidolite cat’s eye’ or ‘African cat’s eye’, it is a magical looking stone that has been used since Roman civilization. It is believed that Roman soldiers carried it as a talisman during battles to ward off any danger. In Chinese culture, tiger’s eye is considered a symbol of courage that protects the wearer against opposing forces. Many also believed that this gorgeous gemstone has healing properties that help in relieving health problems. Array of jewelleries are mounted with this mystical stone that catches eyes with its incredible lustre and shine. The most common jewellery made from Tiger’s eye ranges from big stone bracelets, to necklaces and pendants. If you are curious about this lovable stone or about its healing energies, we are giving you all detailed information right here.

Origin and supply of Tiger eye

The shapeshifter” Tiger eye is a kind of macrocrystalline or fibrous quartz that are formed crocidolite when crystals comes together within it. Crocidolite is a type of asbestos, as the quartz develops the Crocidolite dissolves and offers this stone chatoyancy, which causes colour changing effect when viewed from different angles. Tiger’s eye is mined in many parts around the world like South Africa, East Asia and some parts of United states. You can identify this beautiful stone with its golden-brown colour and chatoyancy effect. It has good hardness and durability, measured at 6.5-7 on Mohs scale. This honey coloured stone is formed from the hawk’s eye. Tiger’s eye jewellery has been worn since decades as it is cherished as a protection stone and people carried it during long journeys.

How Is Tiger’s Eye Mined?

Tiger’s eye is recognized for its brilliant golden and brown colours. One of the best things about this stone is the chatoyancy effect, in which a band of reflected light known as cat’s eye moves just beneath the surface of a cabochon cut and displays a lighting show on its shiny surface. Tiger’s eye has an amazing lustre that makes it stand out from the similar tone stones.

It has a captivating melange of golden and brown colour that looks very impressive. The colours displayed by this Tiger’s stone is due to pseudomorph feature. Unique swirls of honey and chocolate make this stone impressive in the appearance. The chatoyancy effect makes this stone exclusive as it can only be seen in Chrysoberyl other than tiger’s eye.

Tiger’s eye is a colour changing stone that displays beautiful golden and brown colours with black and yellow stripes. The beads or cabochons showcase shiny lustre and chatoyancy phenomenon that can easily be seen from a naked eye. Because of the black and yellow bands, it is mainly used for making large size pendants and necklaces. However, it doesn’t often have a transparent make and is mostly found in colour-blocked specimens.

Tiger’s eye gemstone is usually cut in a cabochon style that maximizes its brilliance. You will find opaque shape tiger’s eye stones in its natural brown or golden colours. With the intent of displaying its incredible chatoyancy effect, cabochon cut is considered ideal for this mysterious variety of quartz. Cutting of tiger’s eye has be performed with skilful orientation for achieving the best chatoyancy effect.

Tiger’s eye mining is not restricted, hence, it is produced in abundance, so the price doesn’t get affected by the weight of the stone. You will find beautiful jewellery of tiger’s eye at easily accessible prices.

Tiger’s eye stone is considered a symbol of protection and fortune. This beautiful stone is said to get its healing vibrations from the Sun and Earth elements and is believed to be a beneficial gemstone, both as jewellery and decorative. There are many benefits of a Tiger’s eye stone, the stone not only looks gorgeous but also brings a lot of aesthetically gifted goodness with it.

Tiger’s eye is also said to be the zodiac stone for Gemini. It helps enhancing the mental strength of the wearer and offer courage, safety and self-esteem. All these qualities of tiger’s eye make it a stone of power. This amazing stone is believed to offer relief from stubbornness and helps the wearer to take right decisions at the right time. Individual who are born under Gemini zodiac sign may benefits immensely from the magical powers of tiger’s stone. The stone is also heard to give an ability to the wearer to take right actions for the desired results.

Tiger’s eye embedded jewellery can work as a protector for the wearer against evils and negative forces. It believed to be associated with prosperity and wealth, and brings focus and confidence. Tiger’s stone is heard to have high vibrations, which may help in offering stability and stress relief to people suffering from stress or depression. It also helps in reliving health problems like blood pressure.

This mystically hued Tiger’s eye stone is also often believed to be associated with fortune and protection. It is known to greatly help in removing any evil energies around the person and grant confidence and strength.

According to Feng Shui, tiger’s eye stone should be placed at the entrance of home as a safeguard for you and family. It also has calming properties that make it an ideal stone for children’s room, home or offices.

1. What kind of stone is Tiger’s eye?

Tiger eye stone is a crystal with stunning bands of yellow to golden colour over it. The stone is considered powerful that helps in relieve fear, anxiety and depression. It is also believed to support the wearer in decision making, hence, makes you brave and confident.

2. How can you tell if tiger eye stone is real?

Tiger’s eye is a variety of quartz and displays unique shine and lustre. When you look at tiger’s eye, it must look like a glass under lighting exposure and you see silver-toned lustre. The stone rates 7 on Mohs’s hardness scale, thus, if it scratches the glass, it registers higher on Mohs’s scale.

3. Is Tiger eye a birthstone?

Measured at 6.5 to 7 on the Mohs’s scale of hardness, Tiger’s eye is found in the US, South Africa, Brazil, East Asia and India.

Tiger’s eye is quite rare due to worldwide distribution, but regard to its deposits located in South Africa and Thailand, it is an inexpensive stone which is quite popular for making jewellery.