Watch Video
Did it ever cross your mind that you can wear extra-terrestrial material as an adornment? As someone who takes keen interest in the solar system, you might be fascinated by the different celestial bodies roaming in the space. A meteorite is simply formed when a comet, asteroid, or meteor lands on the surface of earth. What is even more fascinating about these objects crashing from space is they can help the scientists unearth valuable information about the primordial time when the planets had just begun to form. Although meteorites are nothing but interplanetary debris, on several occasions they contain traces of gem quality material.

Origin and Supply of Meteorite

During the creation of the different planets, the dust present in the solar system aggregated for millions of years resulting into the planets we see today. The smaller space bodies like the asteroids and comets are not a part of any planet and therefore roam freely in the space or orbit the other planets. A large segment of asteroids landing on the earth were once a part of the asteroid belt lying between Mars and Jupiter. Most of the times, the meteorites fall into the regions experiencing extreme climatic conditions. Either they are dumped into the hot desert area or the cold ice-covered lands of Antarctica. Lack of rainfall in such locations reduces the risk of meteorites being weathered. Thus, they remain buried in the land without undergoing much change. 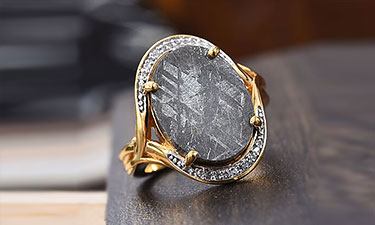 If you are on a hunt for meteorite, the first thing to know is there are high chances of finding a stone meteorite. Commonly they lay undisturbed in inhabited lands like deserts, chilly Antarctic and more. Dark brown and sometimes blackish in hue, they possess immense weight. When you hold a meteorite in hands, it will be usually heavy for its size. Some of the meteorites have marking from the melting that happens while they travel from the atmosphere to the earth’s surface.

Surface of this variety can have some broken circular structure which do not contain any holes. In the present days, you will hardly discover a rock that is rich in metallic iron content. Mostly it is found as a compound in other forms. However, the stone meteorite displays some metallic spots, which actually is iron embedded inside it. Being rich in iron, they cling to magnets. Magnetite, a mineral present in other rocks too can display such quality. What differentiates a stone meteorite from a magnetite is the metal grains present in the extra-terrestrial chunk produce brown-coloured powder on being grained. On the other hand, magnetite results in a blackish powder. ...

The old car parts dumped into the garbage can, how does it look? Doesn’t it turn brownish over the time? An iron meteorite on the surface looks the same. Composed solely of iron and nickel, these form the rarest of all. Black or brown and sometimes both on outside with a metallic lustre, you will struggle to get the magnet away from its surface once it is stuck. Usually, they are asymmetrical in shape. A defining character of these meteorite are the smaller depressions that resemble thumb prints. These are non-porous by nature and do not possess any holes. Usually, when testing a suspected piece for being an iron meteorite, the presence of nickel is tested.

As the name suggests this category is a mixture of the stony and iron meteorite and hence contains both. Appearing almost like a common brownish stone, this variety is rich in mineral content. You can extract a large amount of silicate minerals and olivine crystals from the meteorite. Rarely to be found, some are embedded with gem-quality crystals. Due to the presence of iron, on the surface they are often rusted.