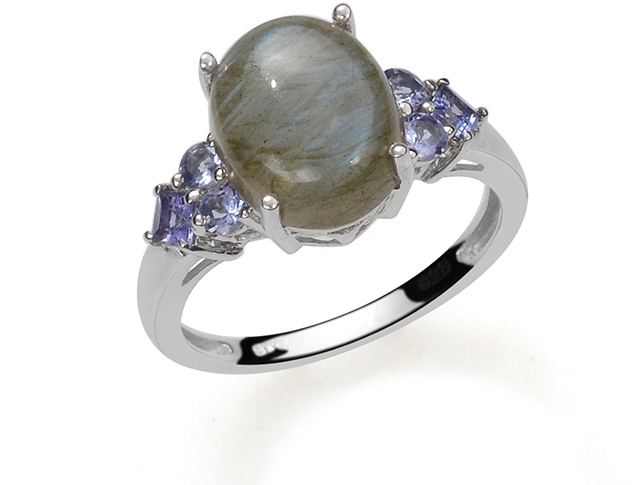 Labradorite is an iridescent gemstone that glows in orange, blue, green, red and yellow light. The unique phenomenon is not found in any other gemstone on earth. It is called labradorescence. It is derived from the plagioclase series which is found in the igneous rocks. Labradorite, feldspar mineral was discovered during the late 17th century in Labrador, a reign in Canada. The geologists who mined it first were astonished by its shimmering appearance. Much before it was found, the natives of the region thought the stone was frozen light, which hovered in the sky at the time an Aurora Borealis was seen. The range of colours visible in the sky during the phenomenon has a stark similarity to the flashes of light emitted by the labradorite gem.

The gemstone was first discovered in the 1770s in north-eastern Canadian region Labrador. The gem is found widely in Paul's Island, which is close to Nian, a town in Labrador. It is commonly found in Norway, Finland, Madagascar, China, the USA, Australia and Slovakia.

Labradorite stone occurs in igneous rock varieties called basalt and gabbro. The less found anorthosite are formed entirely from the gemstone. It also occurs in the sediments of metamorphic amphibolites.

Whether you want to focus your mind through meditations or experience astral projections, the labradorite stone is said to help you to accomplish the task. The striking flashes of light it gives out are known bring the physic powers inside you alive. Below are some believed healing benefits of the gemstone -

1. Physical healing - Using the gemstone may provide relief in lung diseases and respiratory problems, say the healers. It also aids in proper digestion and improves the metabolic rate of the body. The gem is believed to be employed in eye and brain treatments to boost the mental abilities and lessen the factors that cause anxiety and stress. It is also known to calm you down during menstrual cycles and when you are suffering from the symptoms of PMS.

2. Emotional Healing - It is said to help in controlling an overactive mind and improves your imaginative powers. Healers say that labradorite becomes an asset to revitalise your life by eliminating the negative emotions that drain you. It is said to return memories and increase understanding. For some, the gem may help in clearly introspecting and fighting with illusions.

3. Chakra Healing – It is believed that labradorite stone allows the energy to flow freely in your body and mind. The gem is said to increase your ability to express yourself, releasing the stale energy. The darker shade of blue may empower you to be true to yourself. The lighter shade is said to make you relaxed and flexible.

4. Spiritual Energy - Shamans, lightworkers and magicians extensively use the gem. To them, it acts as a protective gemstone when a person recalls a past event. They also say that it stops the release of personal energy, ensuring that all the elemental forces remain within our system.

Below are some astrological properties of Labradorite

1. The gem is said to assist in getting away with anxieties and low self-worth. It brings happiness and confidence.

2. An individual who is having conflicts with others should wear the gem as it is believed to ward off disruptions and improve intuition and patience.

3. Labradorite stone is said to have the ability to eliminate negative energies and replace them with positivity.

4. Labradorite helps in discovering things you might be looking for in your life by evoking your inner consciousness.

5. It helps to invoke the meditative powers of the wearer, which can lead to psychic experiences.

6. It is believed to boost your willpower, helps you to understand yourself better and sharpens your mental abilities.

7. Some say it gets your creative juices flowing and allows you to find ingenious ways to deal with your problems.

8. It can cleanse your third Chakra.

What to remember while buying Labradorite?

The low-grade Labradorite are heat-treated to give them a colourful hue and sold at a good price in the market. In order to get your hands on the best Labradorite, you should be able to discern the imitations from the real gemstone. Below we have mentioned a few pointers which you should keep in mind before buying a Labradorite.

1. Should you leave a Labradorite in water?

The multi-coloured sheen of the gemstone is not affected when left in water for a short while. The tiny droplet of rain or leftover water after you wash your face will not cause any harm. However, if you leave the gemstone in water for a longer duration, the upper layer might disintegrate.

2. What is Black Labradorite?

The black variety of the gemstone is famous for its dark colour. The grey hue has luminescent black specks. It is formed in combination with albite (sodium feldspar and orthoclase (potassium feldspar. )

The gem is available in the market in various shapes and sizes. They are normally cabbed for jewellery making. The large Labradorite crystals displaying uniform schillers are in demand. The best quality comes from Finland, which has a higher price compared to other feldspars. However, in general, Labradorite is sold at a reasonable cost.

4. Where can you find the finest quality of Labradorite?

The best sources of the gemstone are Finland and Canada. Other than these two countries you can buy them from locations in Australia, Costa Rica, Germany, Madagascar, Mexico, Norway, Russia, and the United States.

5. In which colours labradorite occurs?

The gemstone is commonly found in metallic hues with a vibrant mix of blue, green, yellow and red. The dark-hued stone displays the phenomenon called labradorescence. It is caused by the internal dispersion of light inside the stone.

6. Does labradorite fade in sunlight?

Being exposed to the sun can fade the colour of the crystals. It also makes them brittle. The gem is not affected by lights present indoors however prolonged exposure to the sun can reduce the hue of the stone.

In nature, the stone occurs in several colours including purple, but purple labradorite is extremely rare.