Watch Video
Revered and sought-after for their gaze-holding and exotic green hues, emeralds have held the fancy of everyone, since forever. The beautiful looking gemstones are widely known for their unique colour-clarity combination. In fact, their colour alone makes them so much more precious than diamonds. The mesmerizing beauty of emeralds makes them the perfect centre-stones in jewellery designs. Here, we’re telling you everything there is to know about this mysterious, beautiful, yet extremely popular gemstone. 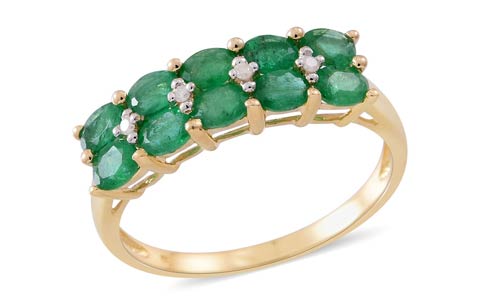 The royal beauty of emeralds dates back several years. It is a gemstone that has been loved and sought since an incredibly long time now. The first mines that ever provided us this gem were traced back in 330 BC. In fact, the famed Queen Cleopatra of Egypt had a particular fascination with the stones. The name of this sparkling gemstone originates from the Old French word “esmeraude” and it means green gem. Known for its noticeable and rich hues, this one of a kind gemstone has earned high praise and cheers over the years.

The oldest mines of the said are known to have been found in Egypt, India, and Austria. However, as of present, the biggest supplier of the said gem is Colombia, which offers 50-95% of the world’s emeralds. Second largest producer of the world is Zambia, which is responsible for 20% of the world’s circulating emerald stone. Other places where you can find the traces of emerald gem are Afghanistan, China, France, Spain, Switzerland, Tanzanite, United States of America, Zambia, Zimbabwe, and several more.

How is emerald mined?

Mining of emeralds is a tricky thing. These are found close surface of the Earth, inside of less valuable rocks. Any kinds of heavy machinery or blasts may harm the gems, so the best ways of mining or extracting the stones

Open-Pit Mining – Where a pit-like gaping hole is set up, which is about 12 metres deep. There is then conducted a water blast, which reveals the sparkling rocks. However, you need to remove lots of unwanted rocks before finding what you’re looking for.

Terrace Mining – This method is mostly used in Cambodia and is similar to Open-Pit Mining. However, bench-like space is formed placed parallel to the pit. There are called exploration pits, where they peek into new rocks.

Tunnel Mining – When a vein with emeralds is placed, a tunnel is dug through the Earth. These tunnels are closer to the surface and can usually only fit in one person at a time.

The mystic and deep green hue of emeralds, in pair with their crystal clarity, are what make them so incredibly popular and famed. The mesmerizing gem holds a lot of value and is considered to be among the beryl mineral family. The same family includes other coloured crystals like aquamarine and morganite, too. The best quality of this stone flaunts a particular verdant emerald green hue that is exclusive to this gem. Apart from the colour, this crystal’s transparency also plays a very strong role in determining the quality – if your stone is absolutely clear, it will have a higher value. Below are mentioned the 4 important Cs that determine the grade of an emerald ...

1. Colour: There’s a whole spanning range of colours that emerald flaunts. You’ll find bespoke pieces that offer a rare yellow-green colour and you’ll find an abode of class in the pieces offering deep blue-green colour. The stones that have a comparatively lighter emerald green colour are referred to as green beryl. That said, the highest and best quality of the stone is considered when green is more vivid or brighter. The pieces that have a grey-ish tone or washed-out colour will fall in less expensive category.

2. Cut: Emerald cut is a popular cut that flaunts the colour and clarity of the stone perfectly. In fact, this type of cut has been named after the gem to show just how perfectly it enhances the colour and clarity. In this, you’ll find various rectangular steps faceted on the gem, making it reflect light the best way. However, an emerald is available in various other cuts, too. Some of them are cushion cut, oval cut, pear cut, and more as such.

3. Clarity: The beauty of emerald is heightened when it is absolutely clear. Its naturally-found fissures are its beauty, given the hundreds of years they take to form. Much unlike diamonds, the stone cannot be graded or scaled according to its clarity. In fact, the natural imperfections in the stone are quite admired. They are called “jardin,” which is a French word for garden. The fractures and fissures in the lush green gem are considered as enhancers of its beauty. Seeing as how every emerald is different than the other, these are considered as the unique fingerprints of the stone.

3. Carat: Unlike other gemstones, the price of emerald doesn’t rise up with its carat weight. Emerald is very rarely found in large sizes, which hence, commands for a higher price. However, that’s not always true. If you have a smaller stone, with deep and rich colour, it would still be better than large and high-carat stone with a poor quality of colour or clarity. In the existing market, you may find emeralds that begin at 0.001 carats to whopping 200 carats.

Emerald Stone Treatment:- There are both treatments recognized and adapted by tradesmen as well as others that aren’t quite as recognized. Most emeralds, after their finishing and cutting process by lapidaries, undergo an oil treatment. This is when the surface-reaching fissures, cracks, and fractures are filled with oil so as to improve the stability and the clarity of stone. This is a process that traders accept, even though its value is lesser than naturally perfect emerald stones. Another process is observed in the markets, which is not accepted by connoisseurs. In that, green oil is dropped into the stone, which changes the colour and brings clarity and consistency in the stone. 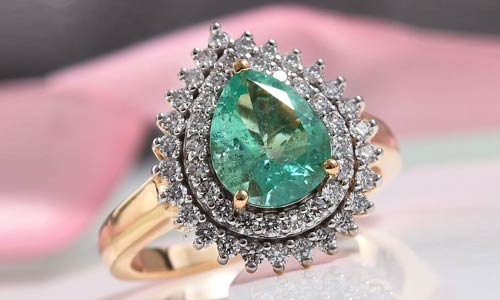 What to Remember While Buying Emerald?

1. What Does Emerald Stone Symbolize?

The gorgeous green colour of this stone is best for representing growth and prosperity. It is also a stone that’s known to symbolise fertility, healing, and balance. It is believed that green is among the most calming and soothing colours to look at.

2. How Can I Tell If an Emerald is Real?

Emerald is a stone that’s relatively tougher, thanks to its rank of 7.5 to 8 on the Mohs Scale of Hardness. This is much higher than its substitutes like glass and quartz, which are much weaker. You may also hold it up against the light. If it reflects rainbow colours, it’s not real emerald.

3. What Do I Look for While Buying Emeralds?

The two main characteristics of emerald that need to be noted are its colour and clarity. They are the biggest determinants of its value. Deeper colour and clear clarity make for a pricier and richer emerald.

4. Which Emerald Stone is the Best?

It is known and acknowledged that the emerald stones mined and sourced from Colombia are the best. The Colombian mines provide 50-95% of the world’s contribution and offer the deepest emerald green colour of stones.

With their rank of 7.5 to 8 on the Mohs Scale of Hardness, emeralds aren’t exactly the softest stones. However, they are very much susceptible to cracking, shattering, or scratching if handled poorly.

6. What Colour Emerald is the Best?

The best quality of emerald flaunts a deeper and richer green shade. Even the gems portraying blue tinge in green are considered to be higher priced. Emeralds with lighters greens aren’t as pricey.

7. What Are the Healing Properties of Emerald?

Emerald is a stone that’s associated with growth, healing, and prosperity. The quaint and peaceful coloured stone is believed to harbour domestic bliss. Healers also call it the stone of Heart Chakra, which relieves you from cardiac problems and offers emotional stability.

8. What Does Birthstone Emerald Mean?

Emerald is the birthstone of the month May. It is extremely fitting as May is the time of Spring, which means growth and healing. Emerald green is the best colour for rebirth, fertility, and prosperity, too. These all make it a perfectly fitting stone for May-born.

9. What Colours Does Emerald Come In?

If it’s not green, it’s not emerald. Emerald is only available in a single colour, however it has different intensities of the same. It does, although, come from the beryl mineral family, which has other stones in different colours like morganite and aquamarine.

10. What Does Oiled Emerald Mean?

The only traditional and acceptable treatment of emerald is called oiling. It is done when the surface-reaching fissures of the stone are filled with oil to offer stability and clarity. However, it does decrease the value, in comparison with untreated emeralds.