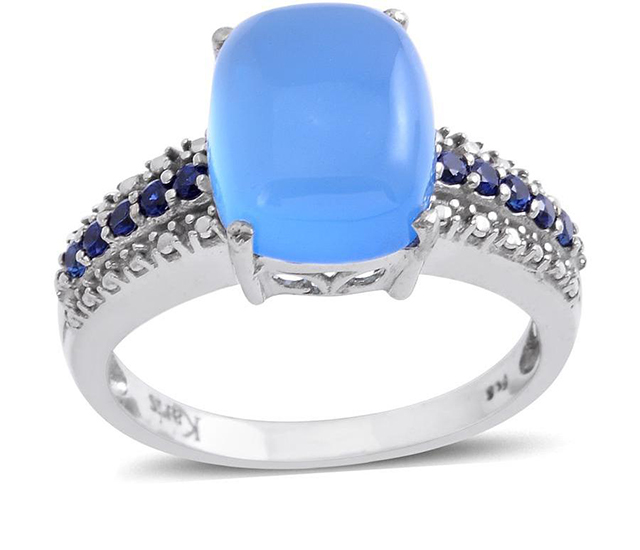 Chalcedony gemstone belongs to the species of quartz group of minerals. Chalcedony is the gemological term applied for all varieties of quartz in cryptocrystalline form. It can occur in a wide range of colours, patterns and sizes. It is known to set the standards high when it comes to the hardness of the jewellery gemstones.

The word Chalcedony is derived from the Latin word ‘Chalcedonius’ which is believed to be derived from ‘Chalcedon’. Through its composition, this stone can be typically identified from other minerals. It has a superior hardness and is a compact to dense form of silica.

Chalcedony is a wonderfully unusual mineral in appearance, with a wealth of appealingly popular variations such as agate, aventurine, carnelian and onyx. In ancient times, this family of beautiful gems was highly prized for use in adornments and official seals.

Often found in sedimentary and volcanic environments, the gemstone is compact silica. It takes a long period of time for the formation of chalcedony stone to occur. The process involves slow deposition of minerals into the pocket of another type of rock such as granite. Areas that are prone to host volcanic activities have the most abundant chalcedonic deposits. High quality Chalcedony stones can be found all over the globe, it’s just that some areas are better than the others. Nearly all parts of the United States are believed to produce chalcedony gems. Other notable places for actual chalcedony (lighter, translucent and bluish material) include Mexico, Brazil, Madagascar, India, Uruguay and Southwestern Africa.

The word chalcedony is thought to come from the Latin word calcedonius, a translation of the original Greek word khalkedon, which is mentioned in the book of revelation. However, this is debatable, since other sources insist the gem was named after the ancient seaport of Chalcedon in Turkey. As far as the Bronze Age, chalcedony was popular in the Mediterranean region, particularly for seals because its composition prevented hot wax from sticking to its surface.

The coloured varieties of chalcedony gems span a rich range of colours and patterns from the deep, opaque green and brown of jasper to the wonderfully original fern-like patterns of moss agate. Rich orange-red carnelians, apple green chrysoprase and deep black onyx are also stunning examples of this versatile family of gemstones.

1) Many Europeans in the 18th century believed that chalcedony stone had the power to drive away the evil spirits.

2) Amazing varieties of chalcedony stone were used in the ancient civilization of Egypt, Rome and Greece in carving and jewellery.

3) The purity of lotus flower in Tibet is symbolized by the Chalcedony gem.

5) Milk stone is an alternative name for chalcedony gemstone. For nursing mothers, the gemstone is believed to be helpful in the production of milk.

6) Chalcedony gemstone is associated with the quartz group of minerals. Quartz is a gemological term, which is applicable to all varieties of the cryptocrystalline form of quartz.

8) Chalcedony gemstone's hardness on Moh's scale is 7 and that's highly impressive for a gemstone.

9) Chalcedony gems are available in various shades like white to light blue and greyish-aqua, pink-red and copper colour.

This amazing gemstone is believed to help the wearer in treating various health problems related to neck, vocal cords and tonsils. It is also said to help in treating chronic hoarseness and inflammation of the throat.

Healers believe it can also protect the wearer against general issues like bad moods, obsessive jealousy and depression. For the treatment of hoarseness, it is believed that this gem boiling water with a pinch of salt can be beneficial.

Blue Chalcedony gemstone is believed to reduce edema while encouraging the fluid flow in the wearer's body. This amazing gemstone is said to help in reducing sensitivity that is caused due to weather changes. On the psychological front, chalcedony gemstone sometimes offers self-confidence and a big-time protection from nightmares.

Chalcedony Gemstone as an Emotional Healer

For people who get worried or anxious very easily, it is believed to be an excellent crystal for them. Tibetans in the ancient times, used this stone as a gem of purity and concentration. All in all, this gemstone is a great emotional healer and it can give the wearer a great and peaceful experience.

Chalcedony gemstone as a Spiritual Healer

Chalcedony gemstone is believed to stimulate the telepathy and all sort of communication with the spirits. Some more amazing believed traits of the blue chalcedony gemstone are commemoration of past lives and articulation regained wisdom. If you are involved into spiritual realm, then this gemstone can be an ideal choice for you.

Chalcedony gem is believed to stimulate the Throat Chakra because it is considered a stone of chakra. Throat chakra allows the energy of various other chakras to be actively expressed because it is the vocal part of the body. While wearing this gemstone, the wearer can easily communicate his ideas, beliefs and emotions freely.

If you place the stone with azurite, together the gemstones are said to develop strong powe,r which can be highly beneficial for the wearer.

The gem is rated 6.5 to 7 on the Mohs hardness scale, making it reasonably durable in jewellery pieces, however, do be careful not to give it any hard knocks.

In general, it is valued according to the standard gemstone qualities- size, cut, quality and type. The colour, clarity and treatment of a stone will also affect its price significantly.

The ethereal blue variety of this stone is incredibly popular in contemporary society and has become a favourite of gem carvers and jewellery designers. Other prized examples include apple green chrysoprase (as mentioned it is one of the most expensive stones in the family), richly black onyx and agate (which features gorgeously striped patterns).

1. What is chalcedony used for?

It is believed to be a nurturing stone that promotes goodwill. The gemstone is said to instil feelings of benevolence and generosity.

2. When was chalcedony gemstone discovered?

It is believed that chalcedony gemstone was somewhere found in 1800 BC.

3. What is the natural colour of chalcedony?

Chalcedony gemstone has a waxy lustre and can be semi-transparent and translucent.

4. Where is blue chalcedony found?

The gemstone is found in various places worldwide, the most prominent ones being Turkey, Montana and Namibia.

5. How can we differentiate between a real chalcedony stone and fake ones?

6. What are the various shades that chalcedony gemstone comes in?

It occurs in a wide range of colours. The most prominent shades are grey, white, brown, red, yellow, orange and black.

7. What is blue chalcedony gemstone good for?

Blue chalcedony gemstone is mostly associated with the throat chakra and is said to help in energy flow throughout the body to promote a sense of ease.

8. Is chalcedony a birthstone?

Yes, it is the birthstone of Sagittarius.